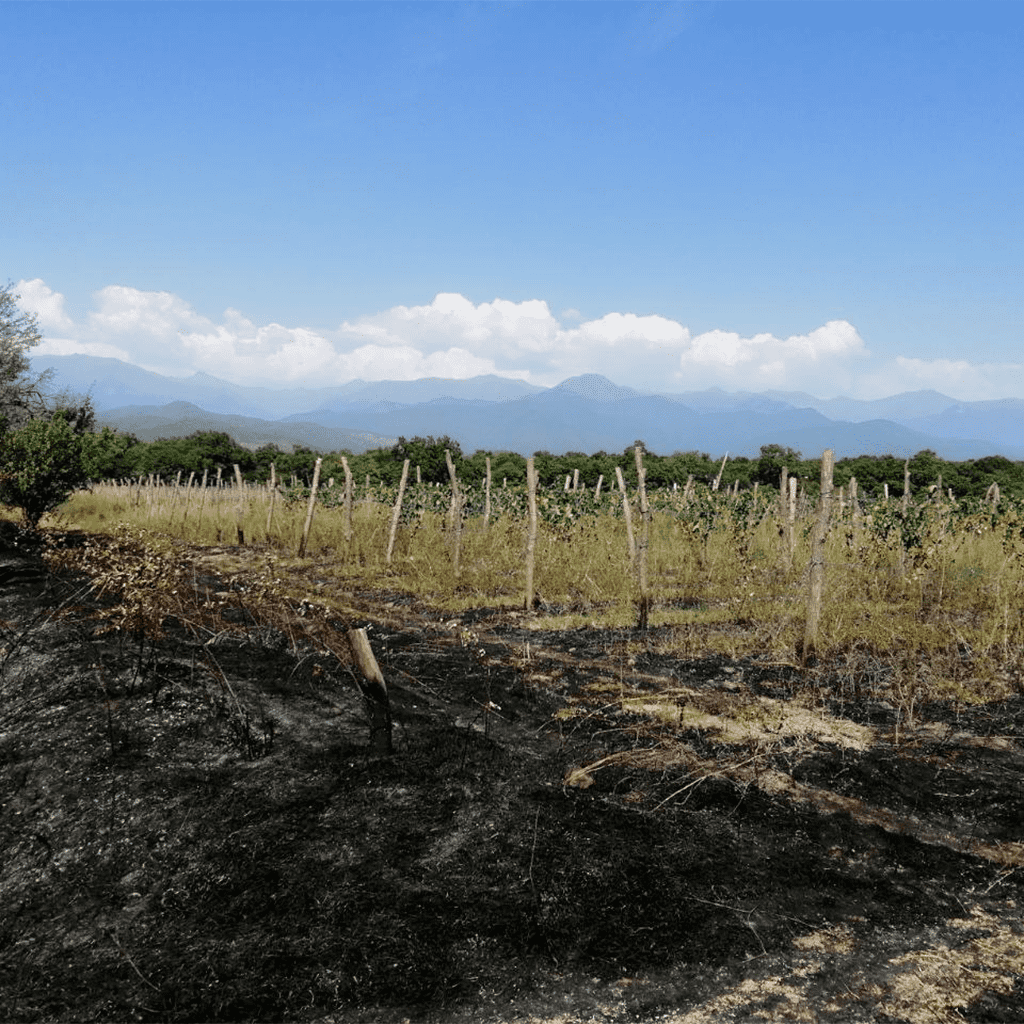 Burning of orchards and vineyards has become a big problem in Georgian villages in recent years. Usually the fire is started by people who "clean up" the remains of the cereal crop harvest on their land by burning it. Fires are hard to control, and often such reckless fires have destroyed not just one but several successive parcels of land, including orchards and vineyards. Such fires have repeatedly affected members of the Natural Wine Association as well.

Vineyards of "NIKA" Winery in Kardenakhi has been on fire a number of times. Vine grower Nika Bakhia says that the only solution is to tighten the law: "My vineyard gets burned almost every year. I put out one fire last year as well. There is a big mess in Kakheti in this regard. There were 23 fires in my vineyard, then I stopped counting. In fact, one hectare of Saperavi vineyard in the Tsarapi microzone was almost completely burned. I think it should be stipulated in the legislation that where there is a vineyard, it is forbidden to start fires."

George Wolski - representative of "Andria Wine" says that the problem lies not in the law, but in its non-enforcement: "Due to this harmful practice, my vineyard has burned down twice. In most cases, fire trucks do not arrive in time, and very large areas of crops and plants are destroyed. Not to mention the vineyard, even houses have burned down several times. Not once has anyone been held accountable, not even a criminal case has been filed against anyone, to scare them in any way for prevention. We often have very good laws, but will anyone do anything to enforce them?"

The vineyards of the "Niabi Winery" in Kaspi miraculously survived the fire. Niko Beriashvili was very lucky to be there at the time of the fire: "A couple of years ago in late autumn, a fire broke out near the vineyard. I was there and immediately called the fire department. Firefighters soon arrived and put the fire out. The fire did not spread over a large area, but there was a danger that the wind would carry it into the vineyard. As we found out, the fire had been started to burn the grass and then they were no longer able to control it. Fortunately, my vineyard survived."

Civil Organizations - CENN and the Center for Human Rights conducted the study on the topic of field fires, in order to analyse the legislation and practice. As it turned out, the lack of preventive measures and the impunity of violators are more serious problems. The organizations provided information on the results of the study to vinegrowers and farmers. A public appeal was sent to the Prime Minister of Georgia, the Minister of Internal Affairs, and the Minister of Environmental Protection and Agriculture, in which more than 50 farmers primarily asked to enforce the law.

"According to the Georgian legislation, disastrous and uncontrolled burning of land plots and making fires in vulnerable areas is classified as a violation of the law, for which rather high sanctions are provided, enforcement procedures are defined, and an authorized body - the patrol police - is assigned. However, these key fire regulations belong to the so-called "dead regulations" and are not enforced in practice. Their implementation, taking into account the principles of caution and humanity, would bring quick results in protecting the country from fires. Measures must be taken both by the Ministry of Environmental Protection and Agriculture and, above all, by the Ministry of the Internal Affairs," the appeal said.

According to the authors of the appeal, if a representative of the patrol police witnesses the burning of the remains on a land plot, the police officer is obliged to draw up a protocol of an administrative offense and to fine the person who lit the fire. Significant circumstances for the proper resolution of the case may be confirmed by a protocol of an administrative offense, an explanation of the person brought to administrative responsibility, testimonies of the victim and witnesses, expert opinion, video or photographic footage, physical evidence, the protocol of seizure of an item and other documents.

One of the signatories to the appeal, Aleko Tskitishvili, executive director of the Human Rights Center, is also a member of the Natural Wine Association. His cellar, Chortauli Vineyards, is located in the village of Bakurtsikhe, Gurjaani municipality, where peasants also frequently set plots on fire with the intention of "cleaning". "There are two main problems - poor awareness and non-enforcement of the law. While working on the study, when we met with grape growers, a debate arose - should we first raise the awareness of people who set fires to the plots or think about enforcing the law. Fires happen almost every day in the summer, and almost no one is punished. This is confirmed by public information. Therefore, if the law is enforced and the people responsible for the fire are fined, it will raise awareness", - Aleko Tskitishvili pointed out.

Rezo Getiashvili, a representative of CENN, is also a member of the Natural Wine Association and is Vazha Getiashvili Wine Cellar winemaker. In his words, man-made fire, even on one's own plot and even with "good intentions," is prohibited and penalized by 500 GEL, but no one knows this, and no one observes the law. "The reason is simple - so far no one has reacted to such a violation. The fires are visible day and night, from afar, and are easily detected by a patrol crew moving at any distance. It's easy to imagine what will happen when this regulation comes into force one day, especially if it matches the season of burning plots and leaves, when the countryside is all in smoke. It's also easy to realize that as of the next day, everyone will think twice before they light a fire. Therefore, this initiative aims at preventing not only fires, but also fines.

Rezo Getiashvili: "There is no "good reason" to start a fire - we destroy our own and others' property and resources; we burn animals and birds; we pollute the air that our children breathe; we emit greenhouse gases into the air to experience even more severe impact of climate change; we do not comply with the simplest safety standards, which makes fires spread to forests, gardens, fields... It can destroy windbreaks, spread to residential buildings, cause a large-scale disaster... Of course, sometimes objective circumstances force us to do this, but in fact this is not a dead-end, and there are ways to solve it (cleaning the remains) easily, cheaply, and, on the contrary, profitably. So, alongside the introduction of sanctions, the state should offer these solutions to the public, first and foremost, by all means to spread the word about the fines, as well as the other drawbacks of man-made fires. This is a wrong tradition, and it is time to change it."

The grape growers who signed the appeal claim that the law already exists, the state is obliged to enforce it. Thus, it is expected that the regulation adopted several years ago will certainly come into force either today or tomorrow. The state, through the orchestrated measures of the responsible agencies, must ensure that the population is ready to follow the law.