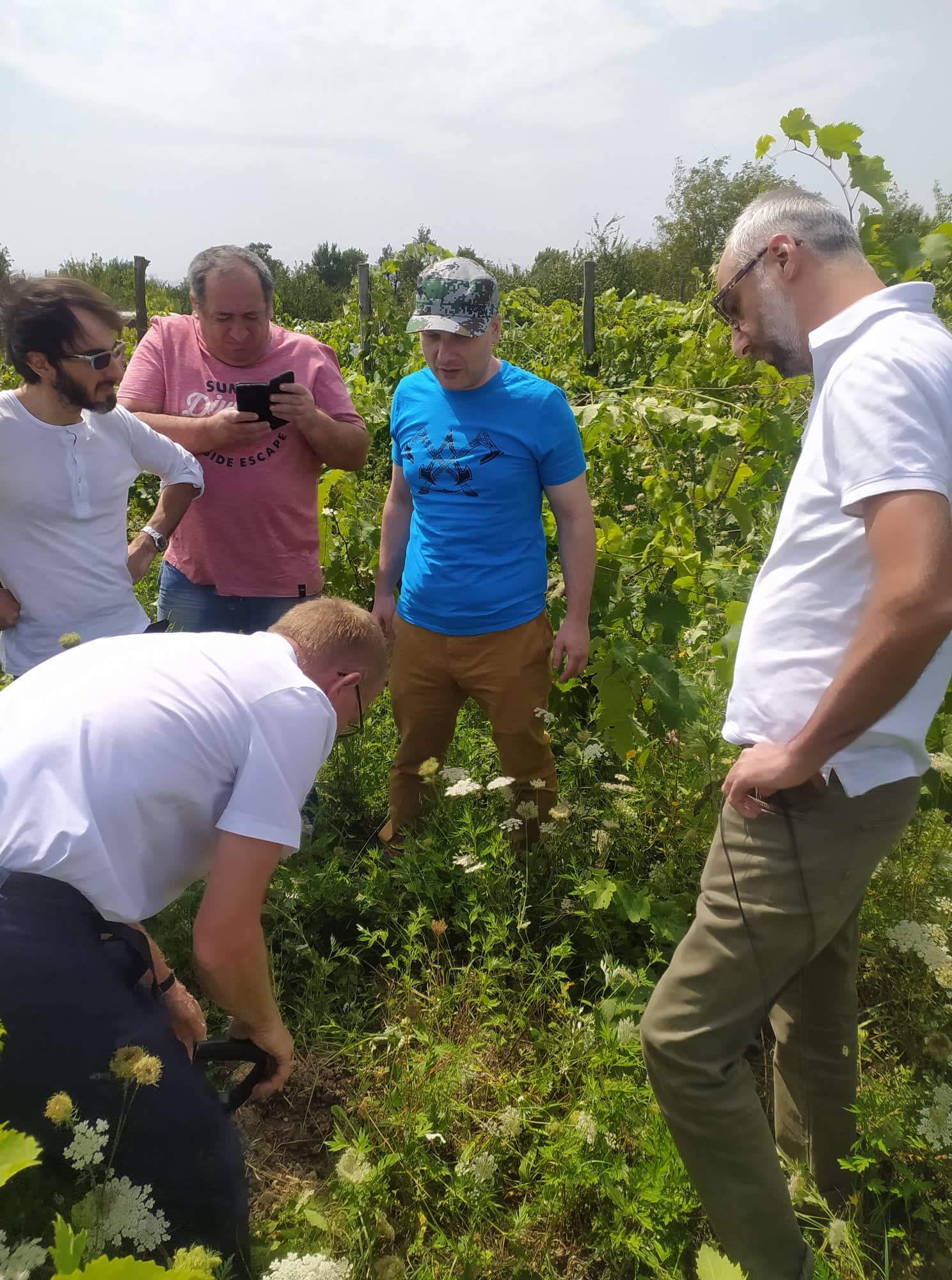 A German expert, Paulin Koepfer visited Georgia in August in the framework of the collaboration project between Natural Wine Association and Deutsche Gesellschaft für Internationale Zusammenarbeit (GIZ). One of the goals of the expert’s mission was to provide trainings to the Association’s internal inspection group and share with them European and particularly German experience in that field.

Natural Wine Association introduced an internal inspection mechanism from the very beginning. Starting from 2018, the Association members undergo mandatory annual inspections, which involve controlling the use of organic ways of vineyards care and meeting the standards for natural winemaking in wineries. Based on the summary of the four years of such inspections, in the beginning of 2022 the Association planned to share the similar European practices and deepen the inspectors’ knowledge.

Under its cooperation with GIZ, the Association invited Paulin Koepfer, - a German expert with a long-standing scientific and practical experience, who represents ECOVIN – a union of organic viticulturists/winemakers in Germany. This union has goals that are similar to those of Natural Wine Association, it unites bio viticulturists, biodynamic specialists and natural wine producers. ECOVIN’s standards have been enforced since 1985, 20 years earlier than bio viticulture or bio winemaking standards were introduced in the European Union. ECOVIN as well as Natural Wine Association has its own sign that its members use on their products.

Back in April Paulin Koepfer had an online meeting with the Association’s inspection group, they agreed the topics and the agenda for the training. During the August 22-23 training, the inspection process was analyzed in detail for the purpose of improving the questionnaires used by the inspectors during their field visits.

Paulin Koepfer shared with the Natural Wine Association inspectors some interesting aspects of Demeter and ECOVIN inspection methodology as well as additional techniques that may be useful during risk identification and lab tests of possible violations. According to the expert, mutual trust between the Association members and inspection group should be further strengthened as the inspection process implemented by the Association is rather a service than supervision or checking. During the provision of service, the enforcement of Natural Wine Association’s standards is assessed. In that regard, the fact that Association’s inspectors are at the same time its members and their vineyards and wineries are also subject to inspection was positively evaluated, because it underscores the importance of collegiality and mutual trust in the inspection process – this is one of the most important strengths of the established methodology.

The second day of the training turned out to be very interesting – on August 23, together with the inspection group of the NWA, an inspection of the Association member Ivane Stepanashvili (“Varianis Marani”), who is at the same time an inspector himself, took place and Paulin Koepfer attended the whole process. He introduced his vision of vineyard inspection and recommendations to the inspection group. During the winery’s inspection, the main emphasis was placed on the branding used in the winery, winemaker’s records and wine storage issues.

In Paulin Koepfer’s opinion, the best method of inspecting the natural wines as final products produced by the Association members is not inspecting the products per se but assessing the process of production itself. However, conducting analysis at various stages of the winemaking is also needed in such rare cases when there are certain suspicions about the processes taking place in the vineyard (leaf inspection) or winery (wine inspection).

For their part, the inspection group members emphasized several issues and ideas that could be discussed as possible options. For example, besides the sign, the Association could issue certificates just like other bodies do. Improving the vineyard record-keeping and vintage logs would also be beneficial as it would simplify monitoring the natural winemaking process for the inspectors.