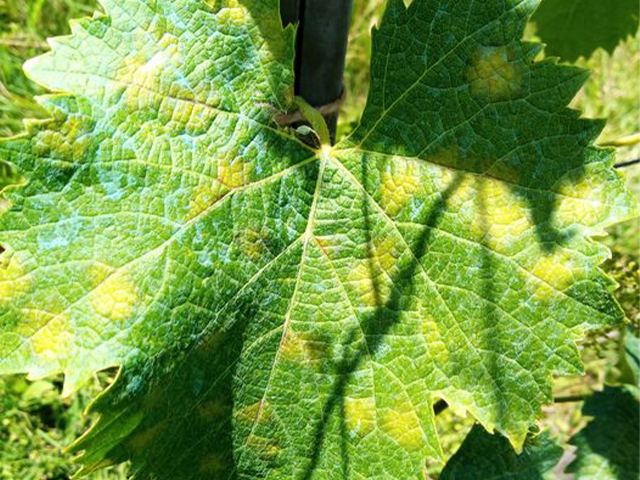 Fungal diseases of grapes - downy mildew and powdery mildew (oidium) - are extremely troublesome for grape growers. The first signs of downy mildew appear on the leaves of the vine in the form of yellowish spots of various sizes. If the humidity is elevated at night, the disease spreads rapidly to the leaves and spreads to the still unformed grape clusters, after which the young berries, and sometimes the whole clusters, wither and fall off.

Parts of the plant diseased with powdery mildew are covered with whitish snowflakes. The disease spreads to vine leaves, stems and berries. Powdery mildew appears in relatively well-formed grape clusters and, before the grapes reach maturity, damages the fruit to such an extent that it makes them unfit for harvesting.

Wine-growers and winemakers, members of the Natural Wine Association, often share experiences that everyone needs, including experienced and novice winemakers. They admit in conversation with NWA.GE that May-July is a key period for downy mildew and powdery mildew management in the viticulture calendar.

Zaza Gagua, Martvilis Marani: "It is well known what a big problem high moisture is in our region, Samegrelo. That is why fungal diseases, especially downy mildew, are quite common in this region. Diseases are usually dealt with by removing leaves from the vines in a timely manner and mowing the vinesyards. Of the disease management agents, I mainly use Italian Bordeaux mixture - "Manica" and I add half a percent wettable sulfur. I take care of all the vine varieties in the same way. It is a widespread myth in Samegrelo that Ojaleshi needs special and different care. Ojaleshi, Aladasturi, Tsitska, and other cultivated vine varieties generally need the same way of management so they are not damaged by fungal diseases. It is not that the disease will only attack Ojaleshi and Tsolikouri - no. If you pay attention, all cultivated vines can get attacked by the disease."

Gogita Mchedlishvili, Iases Marani: "I use a combination of bio preparation "Agrocatena" and copper contact fungicide "Nordox" in downy mildew management, in our village - Kakabeti. Before vine flowering, I sometimes use a preparation with less copper than Nordox, such as Iroko and Kocide. During the flowering period, if bad weather conditions have passed and the vines need to be treated, I only use 2% Agrocatena (20 liters per ton of water). I have an average 7 or 8 treatments a year.

To reduce the possible risk of downy mildew, we no longer cultivate the soil and control weeds with mulch, which keeps the soil surface cool. In our case, the situation in terms of downy mildew is not alarming. "I have plots in places where the possibility of spreading fungal diseases is low."

Lexo Tsikhelishvili, Tsikhelishvili Cellar: "Unlike downy mildew, powdery mildew is not an incurable disease. However, it still requires a lot of attention and proper treatment. At first, the whitish snowflake appears on the grape berries and slowly spoils the cluster. All of this is visually quite easy to notice. "I only use wettable sulfur against powdery mildew and I'm satisfied with its effectiveness."

Beka Gotsadze, Gotsa Wines: "First of all, the most important thing is that the vine is properly cleaned from leaves. The lower buds should be pruned from the beginning. In addition, after frequent inspection, fruitless buds should be removed from the vine. This is how the vine is formed, after which the plant is ventilated and thus, there are less diseases.

I think a winegrower should have a weather station, which costs only 200-300 dollars available on Amazon. It is a station that allows us to know what is happening in the vineyard during the day and at night. Downy mildew appears under certain conditions, mainly after rain, but only if the rainfall is 10 mm or more. If you observe  what the temperature was at the time of certain rainfall, you can freely predict in advance the days when downy mildew may appear on the leaves or grapes. By this time, we need to be ahead of this process and treat the vineyard for preventing the disease. And if you see that the weather was good recently, you will not treat the vineyard, and thus, you will reduce the introduction of heavy metals (such as copper) into your vineyard and the soil will be much more vibrant, rich in various microorganisms.

Besides, in my experience, it is important that the spray nozzles of the sprayer or apparatus are as small as possible to reduce the amount of liquid for vineyard treatment, and this is directly proportional to the application of a smaller amount of fungicides. Unfortunately, I have not seen such spray nozzles in Georgia and I bought them in Germany’’.

Mamuka Chkheidze, Simon Chkheidze Wine Cellar: ’’In order to produce organic products, against downy mildew of leaves and clusters, we provide scheduled treatment with the following preparations before and after vine flowering: "Deportivo" (copper-containing contact preparation), hydrogen peroxide, and homeopathic preparations - "Valerin", Mildew Nosode, and HS-30. We will carry out the similar treatment in the following period, depending on the situation, as soon as powdery mildew is detected. "

Nino Chitoshvili, winegrower-winemaker, Chito's Gvino:  "In case of powdery mildew(oidium), as a rule, I use only wettable sulfur -"Thiovit". I also define the treatment doses in advance. I dissolve 0.4 kg in 100 liters of water and start the treatment after flowering. Alarming period for powdery mildew is July-August and I usually have to take introduce the preparation about 2-3 times during these two months."

Sophio Samteladze, Tariel Lomtadze’s Cellar:  "The problem of downy mildew is known to occur in spring with heavy rainfall and the rapid onset of sunny days. It also requires constant attention from the vinegrower. This year the weather is good for the vineyard in Racha. We do not have excessive rainfall and excessive humidity. With scheduled treatment, we are able to protect the vine from downy mildew and powdery mildew. We apply bio preparations to our vineyards, but in full compliance with the permitted dosage, as copper is also a heavy metal, and applying it in excessive quantities to our vineyards is wrong. After flowering, we provided the fourth treatment, which is exactly against downy mildew and powdery mildew. We used "Agrocatena" and wettable sulfur, as well as, in addition, "Lepidin’’ (against pests).

A properly maintained vineyard is the most important thing for vinegrowers and winemakers, members of the Natural Wine Association. For natural winegrowers, the wine begins in the vineyard, and for them, the treatment of the vine requires special vigilance.