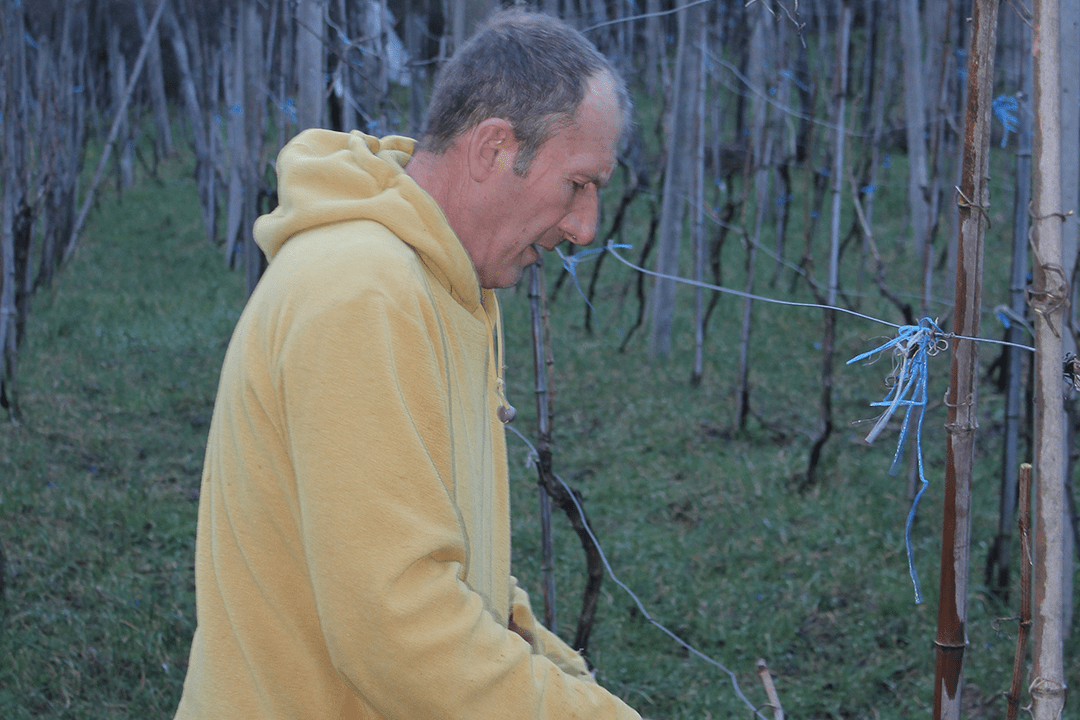 For vine growers, spring is primarily associated with pruning the vines. Of all the other agricultural activities in the vineyard, pruning is one of the most important. In a conversation with NWA.GE, Natural Wine Association members point out that the proper knowledge of pruning and its timing affect the quality of the harvest and later of the wine.

There are several ways and methods of vine pruning. Approaches of vine-growers differ as well. The majority of the experienced vinegrowers know more than one rule of vine pruning-forming. However, they prefer the very method that in their opinion traditionally relates to the specific region or corner of the country.

Archil Guniava, a vinegrower-winemaker from Zestaponi is one of the most experienced among the members of the Natural Wine Association. He says that pruning requires a creative approach from grower and each vine needs individual care.

Archil Guniava, „The Cellar of Archil Guniava“: “Pruning is one of the most responsible activities in the vineyard. For correct pruning, the vinegrower must approach creatively and have long-term experience. He/she must consider many factors, such as vine variety, age, soil fertility, exposition, vine strength, etc. In Imereti, mostly is spread traditional “Georgian Pruning” – one fruiting cane and one two-bud spur. Preferably to leave two-bud spur on vine strain below fruiting cane, to avoid the increasing of the vine strain in the height.

The vinegrower must approach each vine individually and decide how to load the vines. The goalden balance should be chosen, i.e. not burden the vine so much that it produces too many grapes, keeping it from fully ripening and making it weaker; Nor should it be so lightly burdened that the vine loses an entire year, yielding a small number of grapes. During the next pruning, overloaded vines show traces of incorrect pruning of previous year - it is weakened and you have to correct the mistake by reducing the load and leaving only the two-bud spur for allowing resting for a year and regaining the strength."

According to Archil Guniava, all the white varieties of Imereti grapes are pruned in the same way, while the red Otskhanuri Sapere is allowed to be shaped and pruned using the ’’Olikhnari’’ way. Furthermore, as it turns out, the red grape variety, Mgaloblishvili, needs a different method of pruning.

„Working experience with this vine kind was in vain. It could not bear “Georgian Pruning” in my vineyard – the vine produced too many grapes and weakened. For the next year, I had to prune back to two-bud spur and leave it without fruiting cane. Afterwards, the vine gained too much strength and did not produce at all, then again, I burdened it as usual, it weakened again, etc. After two-three years, I concluded that I had to find a mean; thus, I did not leave fruiting cane to the vine, however, I left 2 two-bud spurs, instead of one. Thus, the production and strength, both were stabilized”, - told us Archil Guniava.

Many vine-growers admit they have learned different ways of pruning and have chosen one that they consider most acceptable for their vineyard. As natural winemaking implies, vine-growers try to have a small number of grapes in the vineyard and instead obtain a higher quality wine.

"If we do not prune the vine at all, it will grow a lot of canes, producing a lot of grapes that will be difficult to ripen. At this time the vine canes will be weak, and the grapes will be with fine grains and sour. The key goal of pruning is to regulate the yield of the vine, including its proper growth and shaping."- says Iago Bitarishvili (Cellar “Iago’s Wine”), founder of the Natural Wine Association. As he continues, the Guyot pruning system is most widely spread in Georgia, meaning to leave two fruiting cane per eight buds approx., and two two-bud spurs per two-three buds.

Beka Aslanishvili, a vinegrower-winemaker from Mtskheta (Cellar "Beas Nebi") shares his experience of vine pruning: "Vine must be pruned every year before the juice movement. Vine pruning is interlinked with local meteorological conditions, rootstocks, etc. The vine grower's primary task is to position the canes on the vine so that the plant has the best possible conditions to receive light. The cane should be cut obliquely so that the section area is not damaged by frost. On a low-trained vine planted in a row, we leave (if possible) two two-bud spurs and two fruiting canes. The fruiting cane is the one that should give us the harvest of the year. This aims to grow good canes for the next year and then prune those canes, consequently. When pruning, as many buds should be left as is tolerable for the strength of that particular kind of vine. If the cane is thin and the distance between the buds is close, it means that the vine is not strong, and we should cut the cane as short as possible.”

While searching correct form of pruning, some vinegrowers have found that the vine pruning rules, especially in the case of Imereti and Kartli vine kinds, differ. However, everyone confesses that the vineyard itself is the best teacher and tells you what kind of pruning it needs. It is important for the vinegrower to understand the language of vines and vineyards.

Prices and trends – what do Georgian natural wines cost?

Zero Compromise - The wineries participating in the festival are revealed!